Ask anybody who owns a Tesla, and they will have a reason for buying beyond driving.

For a company that spends zero dollars on marketing, it is astounding to see how much public attention Tesla receive for their range of vehicles.

Tesla Inc is a company that prides itself on breaking the conventional thinking of the automotive industry. In the past 17 years, it has pushed forward solar technology and started to reinvent the way a car company brands itself.

Why has Tesla grown in popularity and value so much over the past year? A lot of has to do with over 17 years planning, persistence, and bucking market trends in the auto industry.

In this article, we will take a look at the branding and marketing tactics that Tesla Inc uses to stand out from the competition.

It’s incredible to realize that before 2004, the name Tesla was synonymous with a quirky genius inventor from the 1900s.

However, after the launch of Elon Musk’s third company SpaceX in 2002, the world was watching closely as he co-founded his fourth company that would launch a new brand of electric car.

The original vision of Tesla Motors was to build a sports car “as a catalyst to accelerate the day of electric vehicles.” A lofty goal, and interestingly, no mention of earning money.

It took another three years until 2006 when Tesla’s all-electric Roadster won Time’s Best Inventions Award. In 2008, the Tesla Roadster went into full production. It was the first production electric vehicle to travel 200 miles per charge.

In Mid 2017, production of the Tesla 3 began, with over 300,000 being sold by late 2019. The Tesla 3 is aimed at the mass market and is labeled as a family car. The launch of the Tesla 3 aligns perfectly with Elon Musk’s vision and business model to build more affordable cars over the years. 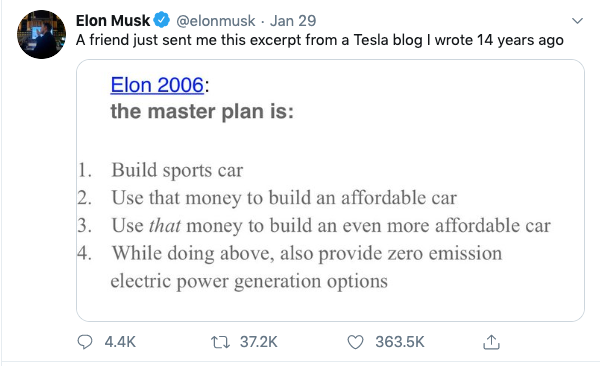 Despite the success of Tesla’s mission, not all of Tesla’s history has been smooth sailing. Over the years, and in the current media climate, Tesla has garnered criticism for being unable to follow through on promises. Yet they have shown that it is possible to keep growing amid challenges.

Here are four marketing lessons that can help any business wanting some of Tesla’s magic to work for them.

Start With a Vision

In 2006, Elon Musk shared his ‘Secret Tesla Motors Master Plan (just between you and me)’ on the Tesla website. Keep in mind this was two years before the car was in production.

In his post, Elon said ‘the overarching purpose of Tesla Motors (and the reason I am funding the company) is to help expedite the move from a mine-and-burn hydrocarbon economy towards a solar electric economy, which I believe to be the primary, but not exclusive, sustainable solution.’

This is a very compelling and unique vision. Unlike most automotive companies operating then (and now) Tesla wasn’t about merely producing cars that were incrementally better than last years. In 2016, Elon updated the vision with ‘Master Plan Part Deux.’

The benefit of sharing this vision with the world is that it gave the brand a mission and a personality. It made the general public feel personally involved and encouraged them to watch the journey. It also made people want to own the products that Musk was talking about.

However, this inspiring beginning was not without problems. Over the years, the company has faced concerns over its finances, ability to build cars at scale, delivery delays and public comments from Musk.

However, one masterstroke that Tesla and Elon Musk often use is to acknowledge and address the issues via social media directly.

Musk is famous for replying to tweets from both reviewers and Tesla owners offering improvement suggestions. This shows that they are listening, and are humble enough to take on feedback. It grows consumer loyalty and furthers the trust of the brand. It also adds a bit of fun for Tesla owners who have a direct line to the company’s CEO with whom they can share ideas. Purchasing a new car is only the beginning of a new customer’s relationship the vehicle’s manufacturer. Very often, as part of the purchase, a new customer will be incentivized to choose to go to a dealer for repairs. This is a great marketing strategy as it also creates increases in revenue for the traditional automakers.

As an electric automaker, Tesla doubled down on the service offering.  Because of the innovative nature of each Tesla vehicle, Tesla owners would be required to have their cars serviced by Tesla Motor themselves.

To take away the inconvenience of having to visit and wait at a dealership for repairs, Tesla developed the Tesla Rangers, a mobile service team that visits the Tesla owner at home. This approach is also another stroke of brilliance for Tesla marketing, as all other vehicle owners see the Tesla vehicle being taken care of conveniently. Not only does this grow brand loyalty, but it also attracts interest from potential customers.

Another clever part of Tesla’s marketing strategy is to setup their own Tesla Charging Stations, known as Superchargers. With a futuristic look and no attendants, the Supercharger stations offer a futuristic piece of real-world advertising. Once a Tesla owner reaches the charging station, they plug in for about 30 minutes and are notified from the Tesla app once the vehicle is ready to go.

Traditional advertising spends billions of dollars trying to get the attention of the consumer. Telsa has a bread strategy that brings the attention directly to consumer.

Create a Point of Difference

Tesla’s market strategy is the polar opposite of other traditional automakers.  As a rule, Tesla does not spend money on paid advertising.  This is incredible considering the $11 Billion dollars other car companies collectively spend on marketing every year. This might seem like a counter-productive brand strategy, but it has not affected Tesla’s brand awareness at all.

Further more, Tesla does no social media marketing, outside of the occasional promotional Tweet from Elon Musk. In March 2019, Tesla famously closed their Facebook page.

One key point of difference that helps Tesla separate itself is how they sell the vehicles. Tesla does not offer cars for sale via dealerships. Instead, they set up showrooms in shopping malls. At each location, there is a variety of vehicles available for test drives. The innovation of each car is on full display inside the showrooms.

This is common sense marketing: go to where your customers already are. As people walk around purchasing other items at shopping malls, they notice the store and slowly start to grow awareness about the brand. Any company can do this by finding ways to go where their customers congregate. By being directly in their line of sight, the customers are more likely to want to know what is offered.

The Tesla brand is indelibly linked with Tesla CEO Elon Musk. The iconic persona of the ‘real-life Tony Stark’ is a huge asset for the company. Similar to Steve Jobs with Apple, the public image of the leader has a big impact on the success of the company.

One way that Elon adds brand personality to Tesla is via the humor that they inject into their marketing.

When Tesla announced that they would release all patents to the public to further the development of electric vehicles, it wasn’t a stuffy corporate announcement. Instead, the headline featured a parody of an internet meme, entitled ‘All our patent are belong to you.’

This freedom to have some humor in marketing is an excellent way to engage trust with your customers. It shows that you are human and want to enjoy the time you spend working to help them.

Of course, there are limits to how free you can be with your online messages on social media. Elon Musk has taken criticism and even had to pay hefty fines of $40 Million for sharing information that was not approved by the board. It is wise to balance the levity and personality of your brand with the core values that your company espouses.

Tesla has always been a company known for innovating in the electric vehicle space. But up until 2017, Tesla had focused only on non-commercial vehicles. The announcement of the Tesla Semi would change all that. The aim was to produce the World’s first electric transport truck. Besides bringing innovation to an industry that is crucial to worldwide commerce, Tesla also aimed to make Semi-trucks actually look cool. The driving cabin had centered steering wheels and control panels, as well as autopilot functionality.

Another surprising announcement was the 2019 Cybertruck, which had been hinted at by Elon Musk as early as 2012. In November 2019, Tesla made the announcement at the same date and location as the original Blade Runner movie. The truck’s design was incredibly different from what was expected (even ‘leaked’ design images were nothing like the final product).

Although the Cybertruck’s design is certain to cause some consumers to dislike it, it garnered over 250,000 preorders only a week after the announcement.

At the core of the Tesla brand is innovation. They are pushing forward the possibility of what an electric car and transportation look like in the future. Their goal to drive the world with sustainable energy has completely changed the automotive industry. This is both inspiring and engaging to the public.

As Tesla’s target market moves from luxury vehicles to affordable electric cars and trucks, their brand recognition has only increased. With the magnetic personality of CEO Elon Musk indelibly tied to the brand, Tesla has eschewed the need for advertising, or a competitive pricing strategy.

And now with the Tesla Semi, Cybertruck, and the revamped next-gen Tesla Roadster on the horizon, it is clear that Tesla is only going to continue to dominate in the electric vehicle market well into the 2020s and beyond.

Telsa owners are some of the most loyal in the marketplace. They eagerly place preorders two years in advance, and they are a walking advertisement for the innovation the company delivers.

These Tesla marketing lessons  can be incorporated into any business that wants to make an impact on the world.

All it takes is openness, consistency, and courage to push forward.

Brandastic is a digital marketing and advertising agency with offices in Orange County, Los Angeles, and Austin. We work with businesses to enhance their branding and customer reach. Talk to us today about stepping up your online marketing game.