What do Google, Uber, Sharpie, White-Out, Post-It, and Venmo all have in common?


The answer is a brand name that’s become part of our everyday language. You may not use Venmo, but if you do, you’ve heard the phrase “just Venmo me.”

How does a company become so successful in their branding that they make it into the English Dictionary? The answer is the combination of a game-changing service, a strong marketing strategy, and a social sharing component.

Venmo tapped into the stream of millennial user consciousness by doing just that. It’s an app that allows you to seamlessly send money among friends, but somehow it’s also a social network.

In this article, we’ll take a look at how Venmo grew its brand and carved out a large chunk of the online payment user share.

Back in 2001, Andrew Kortina and Iqram Magdon-Ismail met as randomly matched roommates in their freshman year at The University of Pennsylvania. After graduating, Andrew and Iqram worked on various coding projects and even went door to door offering to build websites. They did this while also working on their idea for a music selling platform called PhilaFunk.

Fast forward to 2009, still good friends and serial entrepreneurs, the two decided they wanted to develop an easy way to send money back and forth online. Their goal was to combine the simplicity of cash without the burden of lugging physical money around. The original idea came to them when Iqram forgot his wallet on a trip and Andrew covered him for the weekend. When Iqram paid him back with a physical check, they thought there must be a better way.

Spoiler, they figured it out and were acquired by Braintree in 2012. The prototype was simple, worked over SMS, and the framework for adding comments was already there. This led PayPal to acquire Braintree, and in turn Venmo, for $800 million.

While both platforms overlap, PayPal’s core business has expanded into various financial services acting more like a bank while Venmo is now its flagship peer to peer payment platform.

How Exactly Does Venmo Work?

Venmo users create an account from the mobile app or website and fill in some necessary personal and bank account information. Once registered, anyone on the app can be found and paid via their phone number, username, or even email. Venmo then works with a user balance that’s drawn from your bank account, credit card, or debit card.

Transactions are free unless you use a credit card in which case Venmo charges a standard 3% fee. Withdrawing a Venmo balance is free and usually takes a couple of business days to hit your account. But, if you’re in a rush, you can pay a small fee for an immediate transfer.

If you’re still unfamiliar with the process, it usually goes like this. You go out to dinner with five friends, but it’s too difficult for that restaurant to split the bill 5 ways. One person puts the bill on their credit card and everyone else “Venmos” that person their share of the check. No more fumbling around for loose cash, heading to an ATM, or chasing unfulfilled IOUs.

How Many People Use Venmo?

Venmo now boasts over 40 million users. The quantity of payments is up 73% from the past year bringing it to about $24 billion (as announced in the 2nd quarter earnings report of 2019). Venmo’s total payments continue to rise quarter by quarter, but competitors are creeping up

That competitor is Square’s Cash App, which in 2019 began seeing more downloads each month than Venmo. Venmo has a huge head start and an established brand, but Cash App’s extended features like fractional share stock trading and Bitcoin services propel it forward at a staggering rate.

This creates a battleground for two separate brands with similar offerings to duke it out in the marketing arena for brand supremacy.

The Social Network of Money

The differentiating factor between Venmo and Cash App is Venmo’s social feed. This feed shows everyone in your friends list who you paid and what you paid them for. Unless of course, you turn your transactions to private, which does not come as a standard-setting. We didn’t ask for a financial social network, but we joined one without even knowing it.

Venmo’s social feed gives users an intimate view of how their closest friends spend and send money. According, to The National Journal’s Emma Roller,

“It’s this weird voyeurism. We’re all interested in seeing what our friends are paying for. But at the same time, we want to pretend like we don’t care about it.”

According to human psychology, the more we engage with platforms, the more they become daily habits. Don’t be surprised if you start scrolling through your Venmo feed without even needing to make a payment. That’s a big win for Venmo in the normally dull world of financial services.

Big Brands Want in on Venmo

Last year, Fast-food giant Chipotle launched Venmo’s first-ever brand partnership to jump-start its new loyalty program. Chipotle wanted to find out where their customers talk about and engage with money. They landed on Venmo, but the payment app didn’t allow advertising at the time. Thus, the eventual Chipotle + Venmo partnership agreement made waves.

Chipotle kicked off the partnership by paying more than 100,000 customers a total of $250,000 to get people excited about Chipotle rewards. The genius of the plan was that all payments showed up and flooded user feeds. This acted as a form of free advertising for the brand. Even better, countless people took screenshots and shared the news on social media, which expanded the impact of the campaign.

Venmo’s advertising strategy rests on the idea that they want people to share special moments, memories, and funny stories through the conduit of sending money over the cloud. According to Senior group Marketing Director at Venmo & Braintree, Kasia Leyden

“the company believes that the friends you Venmo are your true friends, the ones you actually hang out with, comprising a much smaller group than your connections on social platforms like Facebook and Instagram.”

With a genius set up, the entire Venmo program is set up to capitalize on word of mouth as its main growth marketing engine.

Picture this, you’re at lunch and a co-worker says, “I’ll cover the bill you all can just Venmo me.” If you’re not already a Venmo user you’ll face the social ridicule of paying up with antiquated physical cash. Or you can simply download Venmo and join in on the fun. This creates an endless loop of referrals from close acquaintances, co-workers, friends, and family members. 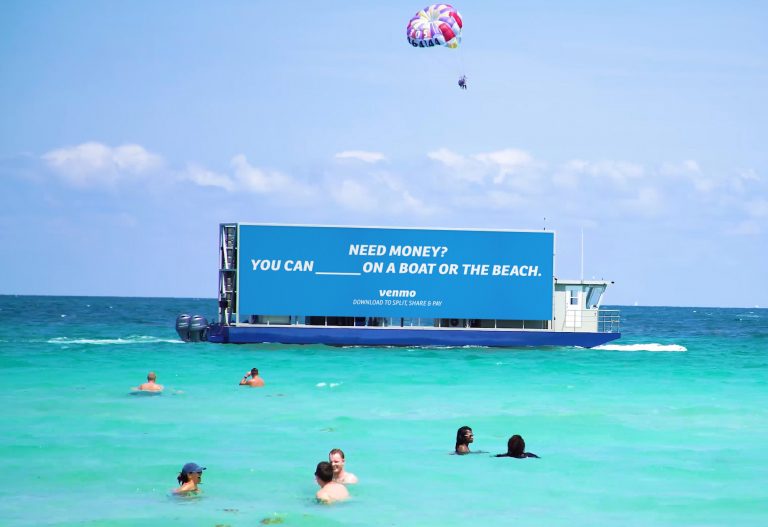 Venmo doesn’t spend a ton of money on traditional advertising, but they have experimented with some buzz-generating outdoor campaigns. One such effort was the kitschy yet smartly done “blank me” campaign. All of the different ads center around various entertainment, sports, travel, food, drink, and college subcultures, which just so happen to be drivers to the use of the app. Another such idea was Venmo’s “pony Up” campaign that was spread across outdoor, digital, local activations, and traditional TV networks like Adult Swim, MTV, and FXX. According to the ad agency used, “Pony Up” is the rallying cry that speaks to payment moments with personality.”

Unfortunately for Venmo, the same aspects that have made the service so popular among users are now identified as posing privacy concerns. This is especially prevalent at a time when people want to take back control of their data.

Organizations like the Mozilla Foundation and the Electronic Frontier Foundation lead the fight against the app. In August 2019, the two organizations co-authored a letter to Venmo demanding that they improve security practices.

“We are writing to express our deep concern about Venmo’s disregard for the importance of user privacy, and to call on Venmo to make two critical changes to its privacy settings: make transactions private by default, and give users privacy settings for their friend lists” -Mozilla Foundation & The Electronic Frontier Foundation

For example, a programmer scraped Venmo’s publicly available transactions and detailed user drug habits, alcohol purchases, and in some cases even fights with significant others. A more recent analysis of Venmo’s privacy policies displayed how public transactions allow hackers to easily access data for phishing attacks.

What Does the Future Hold for Venmo?

The pressure is on as competent competitors like Cash App pop up and gain on market share. The company also faces continued pressure from The FTC in the form of regulations and lawsuits to ensure user privacy and security.

Venmo’s path forward focuses on monetizing its immense user base. As of now, the app is mostly free to use with a 3% transaction fee (when using a payment source outside of your Venmo balance). Now they’ll attempt to diversify that revenue stream through partnerships and promotional deals.

Venmo is positioned for the impending growth of the online payments industry. In 2020, data is power and Venmo wields plenty of it. Will users continue to accept the collecting of their personal data or will privacy concerns and lawsuits weigh the app down? Only time will tell.

How to Replicate Venmo’s Success With Your Business

Hate it or love it, Venmo beat the banks at their own game with a service that practically markets itself. Your product or service probably might not have the same extreme organic sticking power, but you can still learn from the brand.

3 Tactics Your Brand can Learn from Venmo

Venmo is proof that providing convenience in a sharable way works. Marketers dream of a brand where users are also promoters. Venmo introduced a brilliant financial service, but the genius is in their use of social media in a relatively unconventional way.

As the world continues its brisk march toward mobile-first media and services, the growth of brands that capitalize on it will grow with it. On the other hand, brands must not forget about user privacy and security as their online services straddle the uncharted territory of cyberstalking, hacking, phishing scams, and more.

Want to grow the influence and reach of your brand? Brandastic is a full-service digital marketing agency with offices in Orange County, Los Angeles, and Austin. We specialize in creating marketing campaigns that impact and increase revenue for your business. Contact us today to see how we can help you grow.